Chris Godwin was drafted by the Buccaneers in the 3rd round of the 2017 NFL Draft, many scrutinized this selection, but that scrutiny would soon turn into praise.

During his rookie campaign, he filled the 4th receiver role, but that too soon changed. Despite starting in only two games that year, Godwin still saw action in 16 games and quickly began showing signs that the 84th overall selection could become a star.

Targeted 55 times and catching 34 passes for 525 yards and just 1 touchdown, Godwin put together a pretty strong rookie season, considering the Buccaneers already had a pair of star veteran receivers in Mike Evans and DeSean Jackson. It is also impressive considering that the Buccaneers highly utilized their third receiver, Adam Humphries, that Godwin was able to showcase his route running and catching abilities that way he had done.

Early last year, coach Arians touched on Godwin and what we can expect from him at the 2019 Annual League meeting. “I think Chris Godwin is gonna be close to a 100 catch guy,” said Arians. He also went on to say that a big reason he feels that way is because Godwin can play in the slot position. Arians even went further on to say that, “He’s never coming off the field.” That’s some high praise from your Head Coach, and it looks like Godwin will be seeing a much bigger role in this offense this season. *Quotes from our pals over at PewterReport: SR’s Fab 5: Trade For Peterson; Examining Bucs’ Secondary Struggles.

Arians feels blessed to have Godwin:

“Yeah, I’ve been blessed. Hines Ward was one of the best ever. Reggie Wayne bought into it was a physical receiver. Larry Fitzgerald was one of the best blocking receivers the last few years. Chris – that’s his role. That’s why I love when a guy has the breakout games of 12 catches or whatever for 170 yards because he’s doing all that grimy work. You throw him screen passes in the red zone, not just because they’re good at it because they deserve it. He blocked Clay Matthews better than our tight ends did a couple of times.”

Head Coach Bruce Arians later said that the third-year receiver is continually improving, and his growth is more than evident. During his past two seasons, he caught 93 passes for 1,367 and 8 touchdowns. He did all of this in 7 starts.

“Yeah, it’s exactly what I expected of him – just continuation of growth from last year, playing in the slot, playing outside and being a go-to guy down the middle.”

Mike Evans also praised the youngster out of Penn State.

Godwin suffered a hamstring injury which ended his season, however, the fact that he has not played a snap since December 15, 2019, and is ranked 3rd among all NFL wide receivers speaks volumes to his ability. Mike Evans, is only ranked 13th. The third-year receiver may have finished the season early, but he still managed to haul in with 86 receptions on 121 targets for 1,333 yards and 9 touchdowns, earning him PFF’s top grade of 90.7. 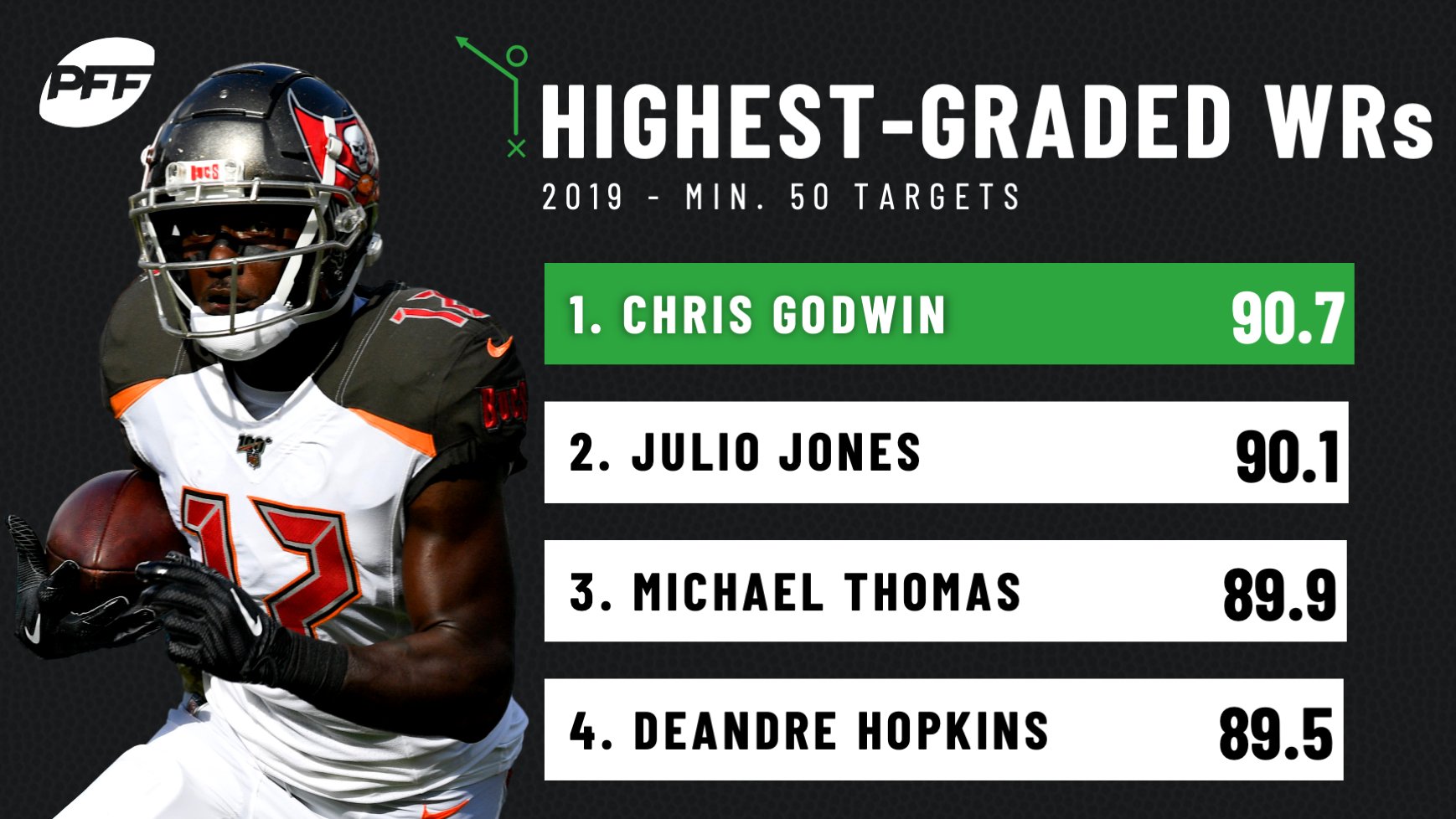 Preseason isn’t just about the big names gracing the field

ON THE CLOCK! Week 3: Bucs vs. Packers